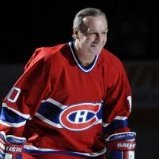 Yes. The lack of online play is extremely disappointing. I get they have to come up with new ideas to sell the game every year. But adding in nhl’94 rewind is targeting gamers 30,40,50 year olds. We w

Skin tones work during the play, too.