Who have you met from the NHL over the years?

I hang out with Rob Ray on a regular basis. He is my best friend's next door neighbor.

I met ex-NHLer Dale Purinton while I was out skating with a friend.   I'm related to ex-Oiler Glenn Anderson. 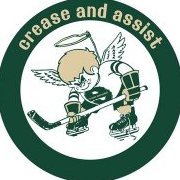 I have 'met' the Stanley Cup, when it made its way to my hometown back in 2001.  Dan Hinote, graduated two years ahead of me brought it home after he won the Cup with the Colorado Avalanche.  They use